You have been here at the library longer than anyone else.
You have seen countless patrons browse the stacks,
each searching for something, whether they know it or not.

Sometimes their search leads them to you.

Sometimes you are taken down, consulted, and are
momentarily allowed to contribute to the world.

Then it is time again to wait.

ARCHIVED is a solo journaling game where you tell the story of a book, map, or other article found in the library. The story unfolds as patrons engage with you, use you for their own ends, and eventually return you to your shelf to wait. Over the course of time you will change not only physically but also how you feel and identify. At the end of the game, you will look back on your past. What will you see when that time comes?

This game includes a 42 page booklet in both color and B&W (coming soon) versions, perfect for screens or home printing.

CONTENT WARNING: This game deals with topics of isolation, loneliness, and being used. Play at your own pace, stop when you need, and please take care of yourself.

All you need to play are these rules, something to write on and write with, a method of tracking time, a quiet place to play, and an hour or two of your time. You can also play in a series of sessions, completing one of the four sections in about 15 to 30 minutes each.

In order to download this game you must purchase it at or above the minimum price of $5 USD. You will get access to the following files:

This is for those who want to engage with Archived but the cost would cause financial hardship. For every copy of the game purchased at full price, a community copy is added for those who need it. Please take advantage of this if you need to, no questions or judgement.

This game's a gem, top to bottom! First off, something I don't often note on, the theming of the rulebook, as you see in those pictures, it'd fit right in at as some kind of esoteric finding aid or something. Under all that solid ambiance, however, lies an incredibly fun game, allowing you to not just tell the story of a random book on a library shelf, but a wide variety of things you'd potentially find in circulation in one library or another. Personally, I played a set of research notes from my d&d setting, which made navigating the story I was telling occasionally take a bit of shoehorning, but even despite that, I had an absolute blast playing anyway. I'd love to pick the game back up again and play as something different next time, as each of the Articles have their own unique questions to answer. The use of each patron that finds you both being effected and effecting the article opens up a fantastic set of avenues into exploring not only what it's like for a document left alone on a shelf, unregarded for a while, but also how much of an effect finding that next fantastic work to read can change a person. Overall, like I said at the beginning, this game's a gem, and an incredible introduction to the world of Lost and Found games.

Thank you so much for the kind words! I appreciate it, and also really exciting to hear about your D&D mashup. I love playing games inside of other games! Looking forward to checking out your video when I have a bit more time. 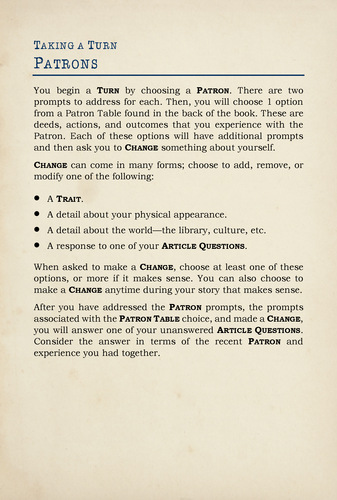 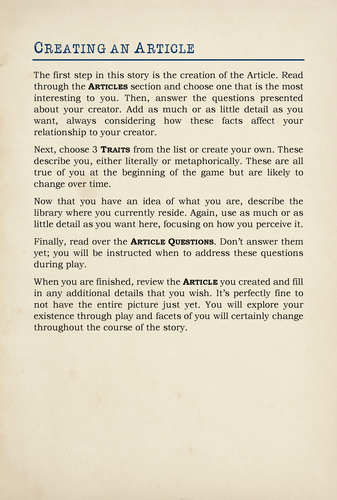 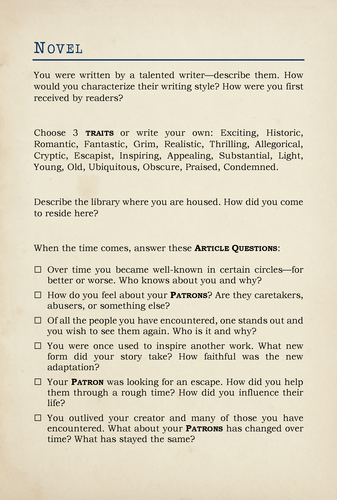 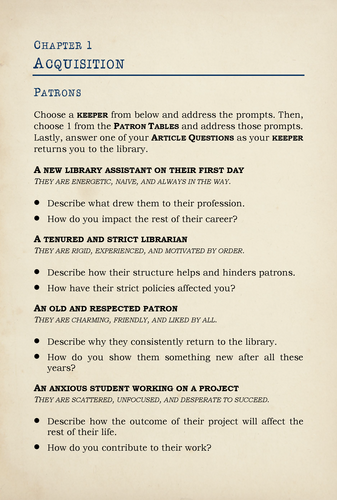