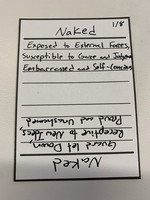 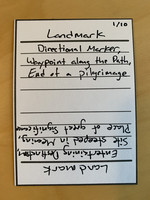 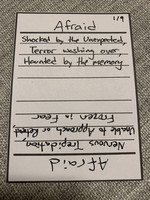 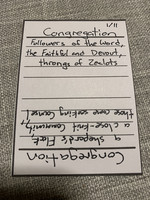 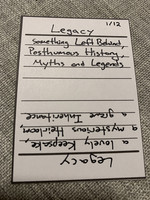 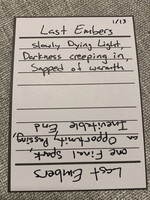 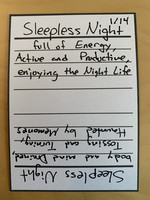 Another week has come and gone and I'm still engaged in writing my own Spindlewheel cards. I'm also really enjoying seeing other cards made by folks in the #spindleyear Twitter hashtag. I've seen folks doing extremely specific card descriptions which is an interesting take. I've also seen people doing weekly instead of daily cards, which is an amazing way to get into this exercise if you can't dedicate time or energy to it every day. The variety of form and function I've seen in these 22-word cards is astounding, and further evidence of how great a game/system Spindlewheel is.

One thing I noticed while looking at my cards this week is that I was doing a lot of concepts and not a lot of "things". After my first two days this week I had come up with "Naked" and "Afraid"—which, yes, is a play on the survival TV show I was watching this week—and realized that I was doing a lot of vague, conceptual ideas. These are fun, but also don't drive home a specific sense of identification, like so many of the proper Spindlewheel cards do. So, I tasked myself with creating more object-oriented cards. I feel successful in this, having created "Landmark" and "Last Embers". Along these same lines, I also want to work on incorporating locations or a sense of place into future cards. I think having a good mix of tangible and ethereal cards will make for a stronger deck.

From a writing standpoint, I've been having trouble not relying on "a" and "the" in the cards, which is strongly suggested not to use in the SRD guide. When I do get away from them, I find I'm trying to use "you" instead, using the card as a way to talk directly to the player. I don't recall seeing anything about "you" in the SRD, but reviewing the official Spindlewheel cards, I don't see this used much, if at all. I believe this to be because the cards are based on the concept of tarot, which speaks to universal truths and not specific things or people. By saying "you", I'd be immediately connecting the concept to a person, taking away some or even all of the interpretation that the game is built around. Expanding my use of specific words and voice is yet another part of the exercise that I greatly appreciate.

I'm still going strong. I will admit I was worried about it up front, as I've done challenges like Inktober before and never kept up. I think doing something word-based is what's really helping me out; I'm a writer first and basically anything else second.

I've also added a column to my spreadsheet that will eventually be used to group the cards into expansions, or 15-card packs that have some kind of theme or tone to them. As I only have 15 cards at the moment, I haven't really felt inspired to start sorting, but I assume as I finish out January and move towards 45 cards, I'll start seeing organic groups emerging. I guess the plan might be to polish these cards up and release them as actual downloadable files for people to use with Spindlewheel games. Who knows, maybe I'll even write my own Spindlwheel game as well.