Mall Kids is a simple tabletop roleplaying game (RPG) about teens who work at a mall and the events that make up their daily lives. You won't be fighting monsters (probably) or saving captured royalty (most likely) but you will be interacting with your friends to collaboratively tell a story about how rebellious teens deal with the brute force of consumer-based capitalism.

Art for Mall Kids was done by Kaitlin Bruder. Find more of their amazing work at bruderkaitlin.com.

Check out the latest expansion Mall Kids: More Malls, More Kids, full of new options for malls & kids as well as new modules to change up how you play.

You can also grab these free expansions, each with new options and suprises:

If you would like to own Mall Kids in zine form, head over to Indie Press Revolution, or check your favorite games retailer. 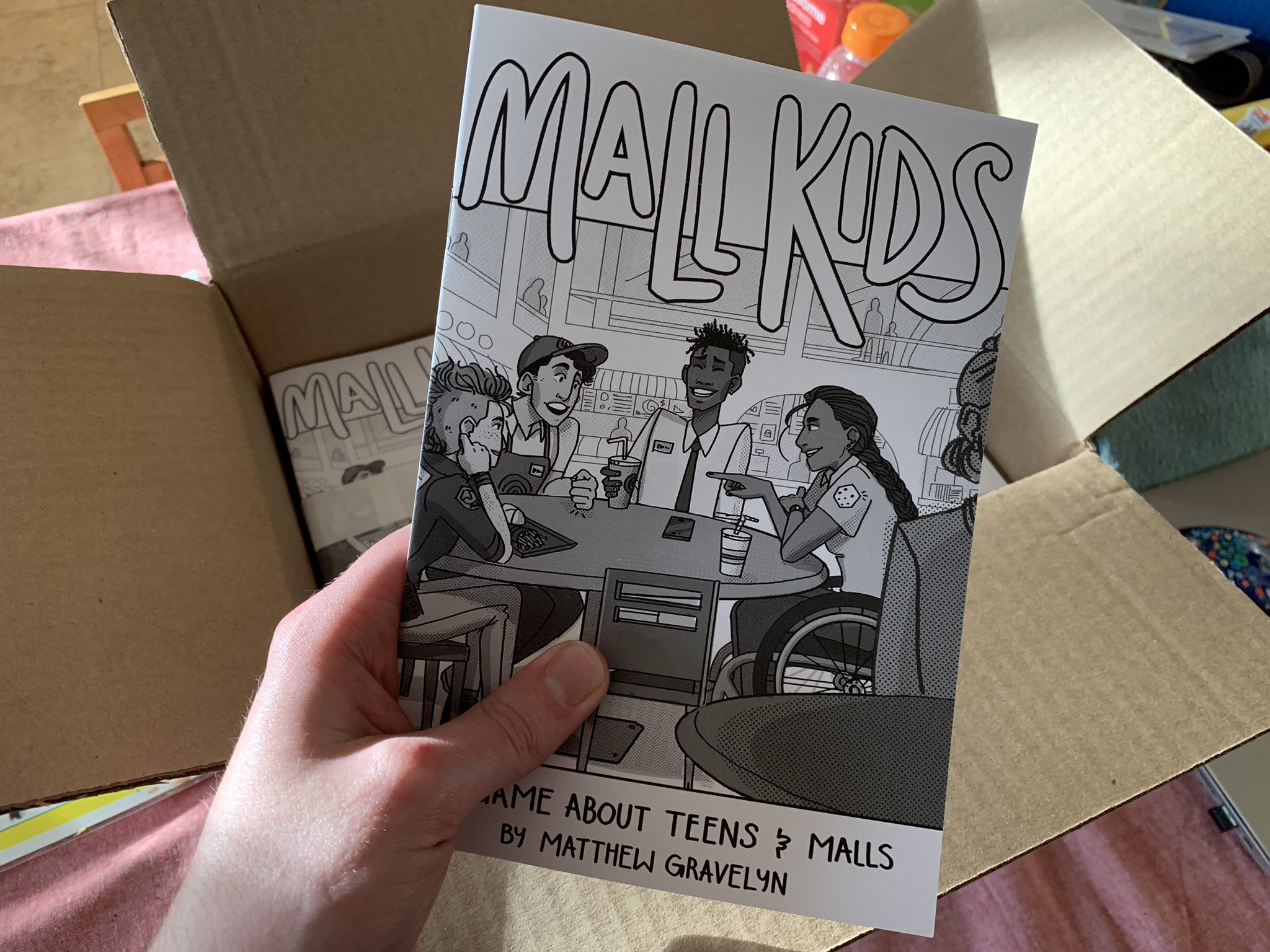 "Tonight's game was the most fun I've ever had roleplaying. I ran Mall Kids for a very full table and now we are #cinnabonded. I literally laughed for 4 hours straight and my face hurts and my heart is so full." - Jillian, @OrbWitch

"The thing I love about Mall Kids is how successfully it mashes Grant Howitt-inspired gonzoism and John Hughsian soulful teen drama. It's goofy like Honey Heist, and yes somebody did turn into a bird, but we also explored the nervous excitement of a teenager asking out his crush for the first time." - minorsolfege

Want to get a taste of Mall Kids before purchasing? Check out one of these amazing actual plays!

Bluff City: America's Playground by Friends at the Table

Round Table - Mall Kids by The Welcome In

Mall Kids One Shot by the Mercenaries of Mischief

All Games, No Masters by Saving Throw

Mall Kids One Shot by Beholder to No One

The talented Sam Leigh has created a bitchin' playlist for Mall Kids that you can listen to during your games. It features tunes from all types of teens and even some tracks you might hear over the mall PA. Listen to it on Spotify.

In order to download this game you must purchase it at or above the minimum price of $5 USD. You will get access to the following files:

This is for those who want to engage with Mall Kids but the cost would cause financial hardship. For every copy of the game purchased at full price, a community copy is added for those who need it. Please take advantage of this if you need to, no questions or judgement.

Love this game so much. You can check out a quick preview I made about the game a while ago if you want a closer look!

Mall Kids is a 24 page rpg about teens surviving in the stark commercial wasteland that is retail work in a mall. It's a group game and it uses d6s, and the GM role rotates between players.

Plotwise the game's setup is mostly grounded in the real-world, circa 2020, and might feel a little mundane. For almost the entire PDF, there's no intrusive magic realism, no Stranger-Things-esque subterranean conspiracy, it's just teens dealing with, honestly, the kinds of problems that teens mostly just keep their heads down and avoid.

The game's mechanics are simple and sort of like Honey Heist. Your stats are split between Corporate and Cred and focusing on one raises it and lowers the other. Raise either stat too high, and you lose.

Mall Kids does provide a lot of useful resources, including safety guidelines, GMing advice, and sample malls. It also gives an outline for the structure of the workday, with some advice built around spots where the characters can do things other than work.

I dig the concept of a really mundane work-a-retail-job rpg, however the game setting the PCs up as folks who work at different stores can make it a little hard for their paths to intersect. Not all PCs have to be in every scene, and ideally the game wants someone to be out so they can GM, but this sort of promotes plots made of dozens of little beats that maybe interconnect sometimes. If you want something that feels like an overarching adventure, you'll have to do some work up front to create a scenario that promotes that.

Alternately, you could run Mega-Sol One.

The very last example mall in the game, Mega throws in sci-fi elements, velociraptors, strange spaces, and stuff that feels like adventure. I would play a Mega-Sol One game in a heartbeat, and it's bristling with hooks.

Overall, I think Mall Kids is a solid game for both folks who wants a heavily realistic-tone retail mall slice-of-life or drama, but it's also totally runnable for folks who want to some Visigoths vs. Mall Goths style surrealism. For groups that are looking for an interesting one-shot or just want to try something different, I would recommend giving this a shot.

This was a fun game! Me and my team gave it a play last night and had a great time.

We also threw together a playlist of mall music to use in the background if anyone is interested!

I'm glad you enjoyed it, and love the music selection! More malls should be playing smooth jazz at all times.

If I buy the game on sale - meaning right now - would that still count towards the Community Copies? If it does not, then I would by it for the full price, because I think this idea is awesome. (Does anyone know?

Hey J! I add community copies for full-priced sales, but you can get the sale price and I’ll add one on your behalf for being awesome and asking. Thanks!

That's really kind! Just realized that you would need to ship the physical things to Europe though, so I will definitely make it the normal price. Thanks for the reply.

Thank you! There are a lot of folks in the indie TTRPG scene doing it that I learned it from. I think it's an amazing way to help those experiencing economic hardship enjoy games too. 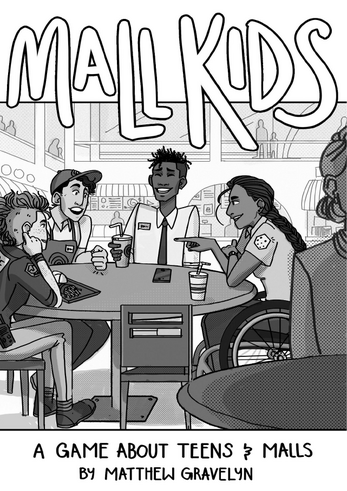 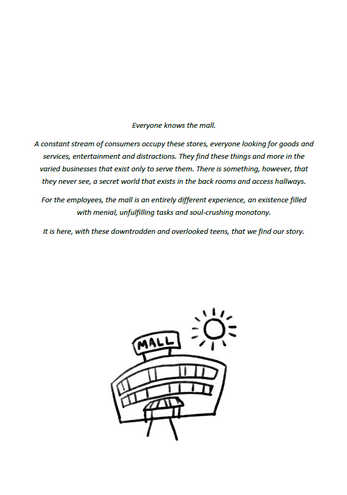 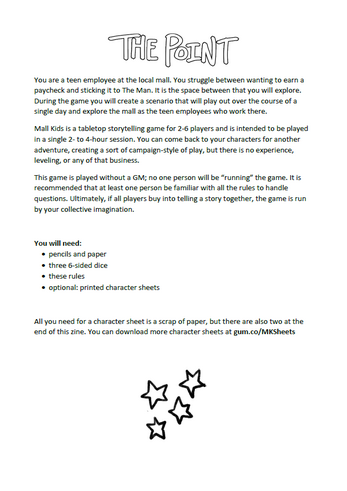 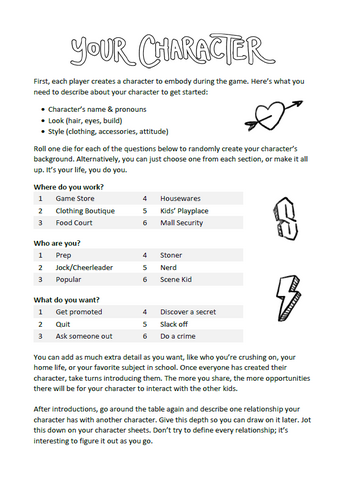